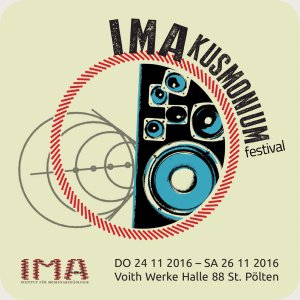 Interview about the Festival Radio Orange

This year´s festival IMAkusmonium in St.Pölten, placed in an industrial building at the voith werke, with the wiener akusmonium, presents a wide range of electronic and acusmatic music.

The Vienna Acousmonium Thomas Gorbach
is an instrument for interpreting computer-generated works and for producing ephemeral dynamically moving sound sculptures. Since 2010 Thomas Gorbach has continued to develop this instrument in conjunction with his concert series ‘The Acousmatic Project’. It is an orchestra of loudspeakers for interpreting stored music but also for the spatialization of music by artists working in the areas of improvisation and conceptual art. Based on the experiences gleaned from the acousmonium of Musiques & Recherches in Brussels, the acousmonium of GRM (Groupe de Recherches Musicales) in Paris, and the MAAST System in Kent/UK, Gorbach has developed a loudspeaker configuration and control unit that make the Vienna Acousmonium an instrument unique to its genre.

The Vienna Acousmonium with its 32 loudspeakers of varying sound qualities installed with the intention of creating the illusion of depth of field offers the best conditions for understanding virtual sounds. The aspect of the ‘space in the sound’ becomes experienceable.

Annette Vande Gorne: ‘spatial figures’ (figures d’espace)
In the sequence of the sound objects the composers of GRM recognized that a connecting element was missing. Thus Francois Bayle, Schaeffer’s first and most important student, introduced the concept of the course of playing and implemented it in his works. Corresponding to this, Annette Vande Gorne, another one of Schaeffer’s students, has developed a technique that translates the music of these connected sound objects, acousmatic sound, to playing at the console of the acousmonium. Many of the names of the various techniques, such as cross-fading, revealing, emphasizing, flickering, etc. have been borrowed from the field of film editing.

Thomas Gorbach: ‘movement of sound in space’
In my search for a conclusive technique for interpretation on the acousmonium two aspects have emerged in connection with working with electronic sound: on the one hand, sound qualities like roughness or smoothness, proximity and distance, accent and echo, colorfulness or proportion of static, etc. and on the other hand, the development within a sound, which I call the spatial aspect of a sound. The tension between sound quality and spatial information produces a conclusive set of instructions for interpretation. This can be notated and serves as the point of departure for playing the acousmonium.