IMA Institut für Medienarchäolgie has invited the sound artists Ryoko Akama (GB/JP), Katharina Klement (A), Felix Kubin (D) and Michael Zacherl (A) for a artist in residence. The new sound pieces composed for the Max Brand Synthesizer will be performed in our concert series. 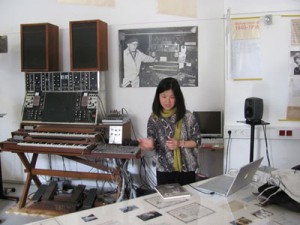 幽玄(yugen) would be found in any person and place. It is an ambiguous Japanese concept to describe silent wisdom and profound austerity characterising its prestigious virtue. 幽(yu) means hazy, quiet, otherworldly whilst玄(gen) means subtle, profound, ever-lasting. Yugen is a poetic term for immanent distinct beauty, which Zeami, a Japanese noh performer and theoretician, describes as “graceful and mysterious elegance” and “a quality of the mind”. The sensitivity of yugen is immanent and eternal. To quote a Japanese author on noh theatre, Konparu; It (yugen) is a profundity and evanescence detached from reality and indicates a mystical state in which beauty is but a premise, something of an unknowable nature… Yugen is not something that can be apprehended intellectually; rather, it exists subjectively for the audience, beyond the mere visual level… if we say that observation is based on spatial perception, then yugen is somehow related to pure continuous time…Yugen does not exist objectively but is the subjective experience of the human being who knows it. My two pieces are named yugen(ism) 01 and yugen(ism) 02, in which I corresponded sounds of Max Brand to yugen elements in the town of Hainburg. Each picture was taken somewhere in my walk through. They, in the studio, acted as a score, so to speak. What a lovely town where old and modern society entwines together by the smell of river. The newly painted asphalt still reserves tinted colour from the past. Max Brand takes this omnipresent temporal-spacial approach. This figure of grandpa, nevertheless, lives in the September air in Hainburg at the present, where the sun welcomes in every morning. 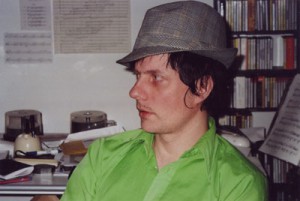 To me the Max Brand Synthesizer is a mix of church organ and military machine. I wanted to bring these two elements out in my piece. While I experimented with various settings and sounds – often late at night, accompanied by the soft patter of rain against the window – the instrument started to develop a life of its own. Its oscillating polyphonic timbre, the instability of its voices that trail off, the crackling and rattling of its impulses unfolded an eerie presence in the vault-like space. This was my hiding place, my last refuge, while outside you could hear explosions and sirens. I sat in here with Max Brand, the stubborn egomaniac, we sat together on a long, thin wire listening to a distant war that wasn’t ours.

The sounds of the room environment played an important role in the development of the piece. Most of the signals do not come directly from the line out of the synthesizer but were recorded with ambience microphones in the dome of the studio, where the loud speakers set the air around them in motion. I didn’t “play” the synthesizer in the classical sense. Instead I tried to send a final radio message. 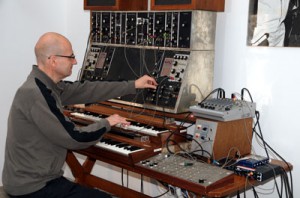 In my application for this IMA-Residency I formulated three questions as basis for my project:
— How can this hybrid (the Max Brand Synthesiser, a.k.a. ‘Moogtonium’) be augmented without losing its specific character?
— How can the playing techniques offered by the synthesiser’s interface be integrated and enhanced?
— How many musical and timbral similarities with the Trautonium or the Subharchord would I discover? How many similarities with a modular Moog Synthesiser?

“erbteieloomen 0.1” is the first work in a loose series of pieces that explore the possibilities gained by tight but gentle integration of ‘scivolo’, the computer plays an important =er hardware. Similar to role in the creation of “erbteieloomen” but stays in the background.

While deliberately based on off-the-shelf hardware and software, specifically created code allowed me to greatly enhance the sonic options and to remotely control the computer. In my ‘computer augmented’ approach I carefully replicated the synthesiser’s own resources by accurately recording control voltages and audio signals and feeding them back into the piece’s patch. Consistently, no audio processing took place on the digital side of this setup.

The computer is entirely controlled by the synthesiser’s physical contraptions: Its lower keyboard is read by the interface situated between the computer and its control voltage output, and accordingly interpreted to trigger the associated actions. Pre-recorded modulation voltages are also fed back into the patch. Previously prepared sound elements are played back and mixed with the synthesiser’s live signal.

For creating the basis of “erbteieloomen 0.1” I picked three characteristics of the Max Brand Synthesiser:
Its ability to have 12 oscillators sounding simultaneously, along with their ‘liveliness’ in terms of tuning (in)stability, and the slow and seemingly never ending droop of the keyboards sample and hold circuit, which provides me with a long and slow change over the course of the piece.

Every sound in this piece was generated on Max Brand’s machine. The presented audio file is a live recording of the concert from Jan 17, 2014. 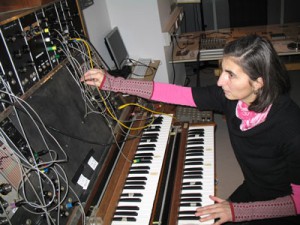 Working with the Max Brand synthesizer was a personal and physical experience. It’s a mighty machine, each plug, knob, or lever holds a secret waiting to be discovered. The keyboard, pedals, and ribbon controller force hands and feet to operate its many parts, to get it to connect and fuse with one’s own physical being.

At some point I felt the urge to scream back at the massive almost physical sounds of this “beast”. Sounds generated from my own voice are fed into it at two points during the clearly marked off and structured piece. They are similar to the sounds of the synthesizer, are hardly identifiable as a human voice. “You and me” is the story of a haptic, sonic, and electronic relationship, in which I as the performer try to tame the wild beast and in which our voices and energies become one.