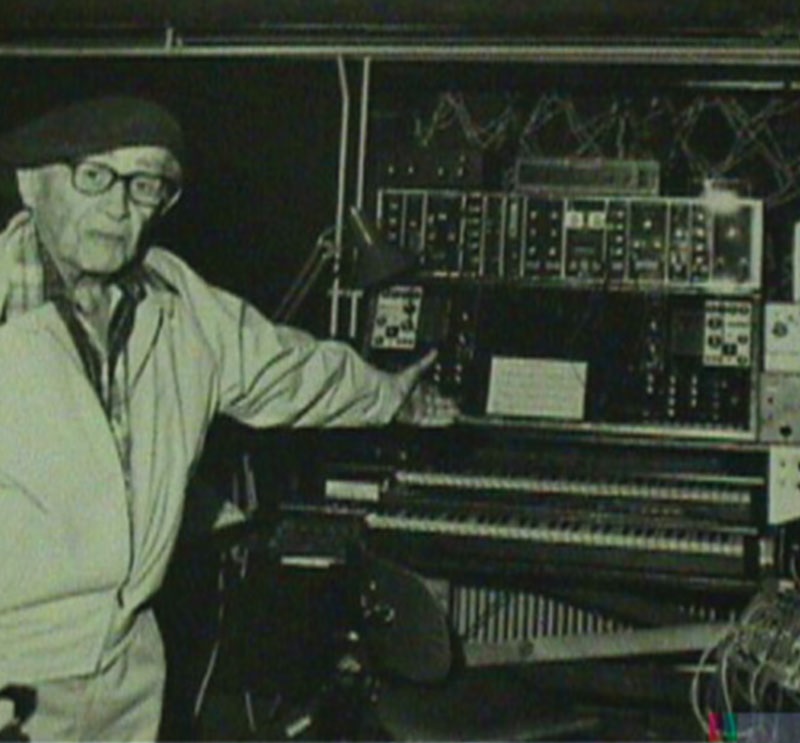 “I am the Machine” – theatrical expression and the belief in the machine.
On the electroacoustic work of the composer Max Brand (Christian Scheib)

Through the many phases of my life runs a constant and unquenchable yearning for the theater.

HOW dramatically serious Max Brand himself – from whom these two words were taken – intended this statement remains to this day a mystery, even to the “electroacoustic musicians”, who, fortunately, were the only ones who took Max Brand’s legacy seriously. “Through the many phases of my life runs a constant and unquenchable yearning for the theater,” he declares at a point when the decisive phases of his life still lie ahead: during what was later to be called the interwar years. But precisely this is the period of Max Brand’s short-lived success, and independent of that also the time in which his thought paradigms emerged: theatrical expression and the belief in machines.

In an essay for the journal “Anbruch” in 1926 he dreams of a “moving stage,” of a “polyphonic movement” of decoration elements, curtains, light, and sound into which the human actors would be tossed “to face their fates or fortunes”. The theater of the future was to “transcend the realistic,” show “utterly unreal processes,” and in the end Max Brand achieved acclaim for his “Zeitoper” Maschinist Hopkins, which was extremely successful but at the same time provoked horrified reactions from far-left progressive and conservative critics alike: in 1929 it was decried as “cinema kitsch with music!” and in Theodor W. Adorno’s analysis it simply lacked any “clear contours of the class struggle”.

Things went downhill from there, both in his artistic and private life. His first wife died, but thanks to his second wife, Anna, he was able to flee from the Nazis. Despite the terrible circumstances of those years his “unquenchable yearning for the theater” can be seen above all in the unfinished operas and librettos but also in the fragments of screenplays and the 1942/43 drafts for radio plays for NBC – resistance programs from New York. His last cycle of electronic music – the Ilian Suite (1965–73) – is also stage music, music for a ballet with dramatic content that was vaguely oriented on Greek mythology. Actually, there is not a single piece in all of Max Brand’s electronic musical legacy that wasn’t intended for theatrical application – whether for multimedia performances like Transparencies in Motion, for ballet (Ilian), or film (The Astronauts).

Brand started corresponding with American laboratories and Herbert Eimert in Cologne in 1956 and later set up his studio on Long Island not far from New York City with sporadic support from Robert Moog, who constructed synthesizer components according to Brand’s specifications. This unique piece of early electronic musical equipment – which was created not only by Brand and Moog but through the work of other engineers as well, including first and foremost a friend, Fred Cochran – stood for decades in the “Max Brand Studio” of the Hanak Museum in Langenzersdorf and can today sometimes be found at the IMA in Hainburg. In 1975 Max and Anna Brand had returned to Austria and moved into a house in Langenzersdorf. During the last few years of his life Brand mistakenly switched tape cases and recorded over original tapes. Because of this, a large part of his electronic oeuvre can no longer be identified or reconstructed, or only with great effort.

Classified in the archive in Langenzersdorf by Christian Scheib in the eighties using the then available technical means as possibly a 30-minute Ilian version, this ballet music was recently found, listened to, and verified by Elisabeth Schimana and has in a sense been reinvented for this exhibition and CD. There is also a sort of storyboard including ¬at times second-by-second precise choreographic instructions or a detailed elaboration of content. These scene-by-scene instructions, which have been reprinted in the booklet, give the reader a true ¬sense of Max Brand’s theatrical energy.

The title Ilian makes reference to the last few letters of Brand’s full first name, Maximilian, but also to the Greek pseudo-mythology-infused atmosphere in which he wrote his last compositions. Brand was familiar with the work of coeval writer Robert Graves, “Homer’s Daughter,” for example, a novel published in 1955. It thematically inspired the sequence of dance scenes for a piece in the Ilian series that tells of the shift from matriarchy to patriarchy on an imaginary Greek island, like a variation of the sacrificial ritual in Stravinsky’s The Rite of Spring with reversed omens.

In the short and rare periods when he is satisfied with how his studio is developing Brand no doubt thinks about composing more electronic operas. But the pieces he actually completes are short, roughly twenty-minute works and cycles. In 1962 with the electronic opus The Astronauts Max Brand builds both in terms of theme and production on his longtime enthusiasm for a worldview based on a “philosophy of technology”. “Philosophy of Technology” is the title of a book by the conservative philosopher Friedrich Dessauer that was published with high print runs in the late twenties. In The Astronauts, Max Brand’s homage to the victims of technological progress, which is set to electronic funeral march fragments, is in its wording reminiscent of Dessauer’s dedication to the “unknown heroes, the in darkness sacrificing, forgotten ones” that prefaces his technology book.

Deep within the hallucinatory ramblings of an electro-acoustic sound, it is this voice, hollering, steeped in pathos and desperately overamplified, that sets your teeth on edge. The launch has already been prepared against a background of crackling tension, the rocket has been fired with a whizz and a bang, and has finally slipped into space to the sound of an atmospheric juddering: these sounds in the first minute of Max Brand’s tape composition The Astronauts are also accompanied by voices, but on the right side of the pathetic. Brand had used NASA recordings of the radio conversations between ground control and John Glenn during the latter’s first flight into space as the basis for his electroacoustic ode, a pathetic oratorio in honor of the god of technology.

“Glad to meet you, Mr. Brown. I am the Machine.” The technical and artistic visionary is looking for a voice – and his ego is already being merged into electronic circuits. In an inimitable meld of expressivity and a belief in machines, the composer used speech passages such as this – taken from the sketch of a performance project at the beginning of the 1960s – to formulate his electronic credo. The fictitious autobiography of the Machine becomes the composer’s self-referential identity loop: feedback at its best.

Born in Lviv in 1896, Max Brand had mutated 60 years later into a solitary pioneer of electronics in New York. With his electronic music he would hardly achieve the publicity he did during the interwar years and only rarely reach an artistic and technical level of production that met his standards, and yet he left behind not only a wonderful machine and a collection of tapes but also the reputation of his artistically uncompromising obsession – and the knowledge of an age that quite simply believed in technical utopias. After decades as a composer in which, between 1920 and 1955, success alternated with being ignored, in which, to escape the Nazis, he fled Vienna for New York via Prague, Paris, Lausanne and Rio de Janeiro, he decided to work from then on with electronic means exclusively. In 1956 this was basically not easy, but Brand’s special role derives from the fact that, unlike most composers of serious music interested in electronics at the time, he had no access to the studios that were then being constructed at the American universities and European radio stations. Accordingly, with a few friends he began to set up his own studio. They encountered the young Robert Moog, collaborated on the development of a number of components, bought a few components that were just about to go into production, and over the course of a good 10 years created the unique machine that still exists today and is perhaps the legacy of this artist.

Brand’s The Astronauts is probably his most famous electroacoustic work, and at the same time, in terms of concept, is symptomatic of his aesthetic view. Shortly before the end of this piece, Brand inserts a funeral march as the vanishing point of technology worship. Sacrifices must be made whether we want to or not, the speaker insists in an adjuring voice, while in the background the same voice, Max Brand’s, intones a Requiem aeternam, a truly unfathomable scene. What can be recognized in his theatrical concept as an Oratorio for speaker, orchestra – replaced by tape – and choir became, in the real world of the production, a furious and pathetic “home-studio production,” a testimony to its age, and a monument to the god of technology, a simultaneity of unrestricted furor and endured piteousness that would be hard to outdo.