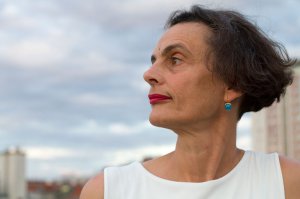 Since the 1980s the musician and composer Elisabeth Schimana has been active as one of the Austrian female pioneers of electronic music with projects marked by a radical approach and equally unconventional aesthetics.

After completing vocal training, she earned degrees in composition, computer music, musicology, and ethnology. She has worked intensively with the theremin in Moscow and with the Max Brand Synthesizer in Vienna. Not only has she created countless radio works in cooperation with ORF Kunstradio but numerous sound installations and interdisciplinary and performative projects as well. Her concepts for experimental set-ups fathom the social field and put to the test new ways of interacting musically on the Internet.

In her artistic work, Schimana examines questions of space, communication, or the body in its presence or absence, especially the imparting of compositional concepts (scores), which gives rise to completely new approaches that experimentally explore how we hear and demand a heightened musical presence on the part of the performer. Her probing approach also led her to found the IMA Institute of Media Archeology, which has dedicated itself to acoustic media at the analogue/digital interface and to the subject of women, art, and technology since 2005.

Schimana’s award-winning and internationally performed work spans the gamut of composition and free playing, is inextricably bound to her as a live performer, makes reference to historical positions, but resists all attempts at categorization, and stands out, strikingly and reduced, with tremendous intensity. (Milena Meller)