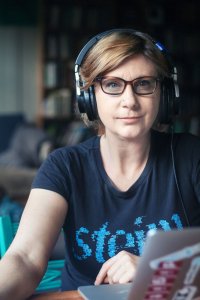 Rebekah Wilson (New Zealand) has found herself hopelessly charmed and immersed in many new lands and continents over the last two decades, driven by her enduring wonderment of the diverse and remarkable offerings of the world’s communities, cultures and musics. From 2001-2003 she was honoured to hold the position of Artistic Co-Director at STEIM (Studio for Electronic and Instrumental Music, Amsterdam), where her passions for music, performance and technology became fused. Since 2004 she has been co-founder and technology director for Chicago’s Source Elements, providing post-production software and services for the film television and radio industry while performing and lecturing in many international venues and festivals on musical and technical topics. Having recently completed her post-graduate degree in the emergent field of networked music performance, she continues today the ever-perpetual dis-entanglement and re-interlacing of her many technical, musical and cinematic threads.