Electronic Brides, Machine Divas and Robotic Visionistas is a research into the artworks by women who have made significant contributions to the fields of Cybernetics, Robotics, and Kinetics. Recognised only since the 1960s, these outstanding women have created a legacy of experimentation, using light, electronics, and digitally controlled sculptural forms. In general, their works exhibit both a sympathy for and a celebration of the body and the female form.

1. The first generation of women to work with electronics, from the 1950s – the 1970s, were often the sole female member of an artistic group, movement, or the female half of an artistic team. They were visionary pioneers who worked alongside their male colleagues in group activity and experimentation. Their work was often performance related, and they were recognised, and exhibited as part of the experimental group shows of The Avant Garde.

Atsuko Tanaka (Japan), a founding member of the Gutai Bijutsu Kyokai (Gutai Art Association) was young artist in quest of ‘an art which has never existed before’. She was part of the many Happenings of the late 1950s in New York and Japan, working alongside Jiro Yoshihara until 1965. Her career continued as a painter, and Electric Dress of 1956 was a combination ofd the Japanese kimono and modern industrial technology. The electronic sculpture was worn by Tanaka in performances, and consisted of more than one hundred colored light bulibs and neon light tubes, that flash every two and a half minutes. Tanaka’s first exhibition in the West was at the Galerie im Taxis im Palais, Innsbrueck, Austria, in 2002, when she wore the dress as part of a live performance. This work was also included in the 2007 documenta.

Liliane Lijn (UK), one of the pioneers of the transformation of scientific thought into art, uses light, sound, movement, performance, text, video and objects in her art. Her explorations have included the early light sculptures and ‚Poem Machines‘ of the 1960s, through artists’ books such as Crossing Map (1983), her performing Goddesses (exhibited at the Venice Biennale in 1986), large-scale public sculptures such as the controversial Earth Sea Light Koan (1997) on the Isle of Wight, and the intimacy and power of her recent work. Her My Body Myself (pictured), created in 1996, is a newer work that demonstrates her continuing creative energy. Lijn has been part of the London avant garde since the mid 1960s.

Lillian Schwartz (USA) worked in the early stages of her career with scientists at Bell Laboratories developing mixtures of sound, video and art. Later on, during the 1980s, Schwartz made many experiments with artworks manipulating images using computer technology and creating some artworks of her own. Lillian Schwartz: A Beautiful Virus Inside the Machine, a curated touring film programme by Gregory Kurcewicz and Lumen (Leeds, UK) screened nationally and Internationally throughout 2003–5. The series highlighted the pioneering work of Schwartz, resident artist and consultant at Bell Laboratories (New Jersey), 1969—2002, During the 70s and 80s Schwartz developed a catalogue of visionary techniques for the use of the computer system by artists. Her formal explorations in abstract animation involved the marriage of film, computers and music in collaboration with such luminaries as computer programmer Kenneth Knowlton and computer musicians Jean–Claude Risset, Max Mathews and Richard Moore.

Prof. Nadia Magnenat-Thalmann (Canada/Switzerland) pioneered research into virtual humans over the last 25 years. She obtained several Bachelor’s and Master’s degrees in various disciplines (Psychology, Biology and Chemistry) and a PhD in Quantum Physics from the University of Geneva in 1977. From 1977 to 1988, she was a Professor at the University of Montreal where she founded the research lab MIRALab. She was elected WOMAN OF THE YEAR in the Grand Montreal for her pioneering work on virtual humans and presented the artistic part of her work at the MODERN ART MUSEUM in New York in 1988.

2. The second generation of female artists to work with Electronics were inventors and creators, and explored ‘new’ interactive and telerobotic processes. They include Steina Vasulka, Lynn Hershman-Leeson and Adrienne Wortzel. Each in their own way established a new machine vision which emerged individually from their multidisciplinary approach as artists, and their formal education as artists interested in science and technology. Working in a largely male dominated field, these women creatively combine their knowledge of science, engineering and art, and create electronic visions, digital divas and robotic figures that have become strong examples and role models of female intelligence for the current generation of artists. 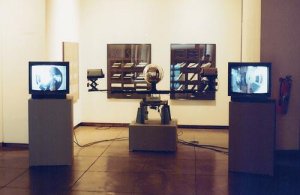 „In the late seventies, I began a series of environments titled Machine Vision and Allvision, with a mirrored sphere. Another variation has a motorized moving mirror in front of the camera so that depending on the horizontal or vertical positioning of the mirror, the video monitor displays a continuous pan or tilt either back/forth or up/down. A third variation is a continuous rotation through a turning prism, while still another has a zoom lens in continuing motion, in/out. These automatic motions simulate all possible camera movements freeing the human eye from being the central point of the universe.„

Lynn Hershman–Leeson (USA), Professor Emeritus at the University of California, has many contributions as a female, feminist artist working with electronics, and digital process. She is specially accredited for the first interactive videodisc, interactive works include Lorna (1983-84), and later A Room of Ones Own (1990-93). Her photographic work Phantom Limb Series (1988), and Cyborg Series (1999–) predate digital technology, but are hints of future ideas. A cross disciplinary artist and filmmaker, Hershman-Leeson created two robotic works, TeleroboticTillie and CybeRoberta (1970-1998) were controlled by viewers on the Internet. Of note, Hershmann-Leeson made one of the first feature films set entirely in a digital environment, by placing the actors against a blue screen.

Adrienne Wortzel (USA) originally trained as a painter. After a successful selling career, she began an exploration of digital interaction for the Internet and as theatre, that brought her to more of a producer’s role. She created the networked robotic installation „Camouflage Town,“ presented at the Whitney Museum’s „Data Dynamics“ show in 2001. Wortzel’s ideas for Kiru, a wandering robot in the work, pushed her collaborating engineer Marcin Balicki and scientist Carl Weiman to new limits–in terms of enabling the robot to ’see‘ and ‚hear‘ in real-time, and tracking its movements. As visitors interacted with Kiru through audio and video streams, the project also became an interesting sociological experiment–particularly as Kiru slipped in and out of autonomous control, at times ’speaking‘ with the public, and at others, spouting esoteric comments. Kiru’s personality reflects its ability to be each virtual and real visitor’s avatar/alter ego

3. A new generation ‘new media’ artists, internationally active and recognised across many media areas of inquiry, includes Jessica Field (Canada); Boryana Rossa (Bulgaria), Karen Marcelo (USA), Beatrice de Costa (USA), Natalie Jeremijenko (USA), Reva Stone (Canada), and Eva Wohlgemuth (Austria). These artists have established a female orientated digital exploration of the human body and living systems. Their works have clearly defined a marked investigation ‘from a female point of view’. Rather than creating idealistic (or perfect) female forms they look inward and reveal an understanding of both engineering, manipulation of code, and the ability to dealve deeply into personal reflection.

The women of San Francisco’s Survival Research Labs are Diana Coopersmith, Debbie Lee, Baba Lou, Karen Marcelo, Sabrina Merlo, Amy Miller, and Liisa Pine. They lead the pack of creative women in robotics today.
Karen Marcelo worked with the CSL group at Xerox PARC developing mobile code for simulated ubiquitous computing environments and recombinant computing research. Previous projects she has worked on include a VRML authoring tool, a web-based multi-user ‚world‘ Nerve Garden which received Honorable Mention in the .NET category at Ars Electronica 1998, and a parameterized 3D visualization program (Tetrahedonism) which placed 3rd in the Science and Engineering category of the VRML Excellence Awards in 1997. In her spare time she is Tele-obliteration Engineer for Survival Research Labs, coding Internet telerobotic systems for lethal robots.

Jessica Field (Canada) makes use of robotic and cybernetic principles to establish a parallel between the machine and the human behavior that results from an externally imposed adaptation to the environment. Autonomous Robot, If it was broken, it would be simple, but it is not and Personal Scale were exhibited beginning in 1999.. On February 26, 2001, within the context of an interventionist art project, she brought the Stumbling Robot to the Pickering Town Centre, a shopping mall, and documented the robot’s precarious steps on video. In order to focus her attention on the interactions between the curious public and the robot, she removed herself from the scene in such a way that it was impossible to link her with the robot. On June 1, 2002, on an invitation from the Pickering Arts Festival, she allowed the Stumbling Robot to wander around the exhibition space.

Boryana Rossa (Bulgaria) understands, that ‘50 years ago we didn’t think about computers as a necessity for our life. Today we can barley survive without them. Her work evidences a symbiosis with the computer, in what she acknowledges is exactly like we live in symbiosis with electricity. About robots, she understands that they ‘are still not recognized to be important to our society as much as electricity or computer, we must think about our common robot/human future, because they soon will be our new symbiotic partner.’ Boryana’s works are performative, yet created in laboratory-like environments. They usually create a danger zone to experience interaction.
Rossa’s 7 voice controlled robots activate sensors, which register their movement. The sensors activate the airflow system and fresh air comes into the box. If the robots stop their movement the ventilator stops working and the ventilation valve is closed, preventing air inside the box.
She describes this work: The body of the performer – the human inside the box — must control the robots by voice. This way they are happy that someone is paying attention to them. They move. The fresh air comes in. If the human stops talking to them, the robots became sad, fall asleep and are deactivated in a few minutes. In other words they die because of a lack of attention. When there is no air inside the box, the human dies too. Or in other words – the human is deactivated. 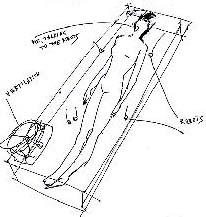 Natalie Jeremijenko (USA) is a new media artist and engineer. She is currently Director of Experimental Product Design Initiative at Yale. She is married to Dalton Conley. Her Feral Robotic Dogs (2005) are created collaboratively with students, and are uniquely digital. But, are they toys? Or, are they investigations into security, companionship or weaponry?

Reva Stone (Canada) identifies her work Carnevale 3.0 as a motorized, life-size, double aluminium cut out of herself as a young girl. (Note: Carnevale 2.0, pictured, is the previous incarnation of this work.) The autonomous form roams the gallery space recording encounters with visitors and projecting „memories“ of these interactions that fade over time, from a video projection unit. The work encapsulates several themes that have been a concern for Stone for the past several years. Her interests have focused on how we, particularly in Western society, increasingly interface with machines that are steadily weaving themselves into our lives to the point of near invisibility. The piece also addresses issues related to the body and potentials for the future regarding the mechanical versus organic body.

Eva Wohlgemuth’s (Austria) long time investigation of a 35 megabyte dataset of her body, digitally scanned, created Bodyscan (1997-) an ongoing series of works that pulls, pushes and transforms the female figure into a variety of digital works, from animation, interactive CAVE experiences, sculpture, installation, text and video. She manipulates the source code and her body has become the source for new and provocative ways to see the female figure. 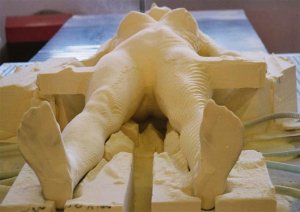 SLOWLY STILL, SO I RISE UP, THE BODY GROWING HIGHER WITH EACH SECOND, AM UP-BORNE STRONGER, DRAWN UP FASTER, UPRISING SWIFTER, MOUNTING STILL HIGHER, HIGHER STILL FASTER…UNBEARABLE
THEN SUDDENLY SURFACE… YET
EVEN AS I LOOK, AS IF TO REMEMBER FOREVER THIS PRISTINE WORLD, ALREADY THE FORMS BECOME MODULATED INTO MEANINGS, CEASE TO BE FORMS, BECOME THE NIGHT …THE PEOPLE.“ (1)
IF YOU LOOK FOR TOO LONG AT A SUBJECT, DO YOU INEVITABLY BECOME IT?