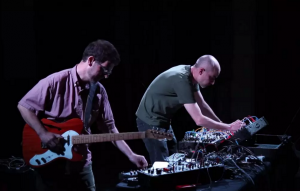 “The best way to know people is to work with them, and that’s a very serious form of intimacy.” Robert Rauschenberg, 1977

Stephen Vitiello and Taylor Deupree’s Captiva was recorded while in residence at the Robert Rauschenberg Foundation’s new Rauschenberg Residency Program at his estate and studio compound in Captiva, Florida. “From the Fish House,” captures a series of duets, recorded in a small guest house, perched above the bay of the inland waters of Captiva Island. Microphones were mounted inside and outside the room, allowing the environmental sounds of osprey, pelicans and water to naturally enter the mix. The primary instrumentation here is modular synthesizer, samples, electric guitar and found objects for percussion. If there’s a missing sound that could never be captured, its the sound of porpoises circling the Fish House, quietly breathing… a moment too fleeting to ever make it to tape, although attempted on many occasions.